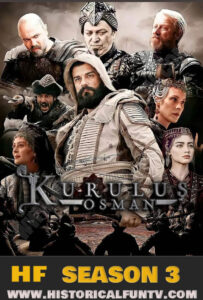 Osman Bey, who consolidated the Turkish dominance in the extreme region with his great victory against Byzantium, finally got his heir. Osman Bey named his son Orhan. Six months after Osman Bey’s victory over the Byzantine army, the news that Kayı Obası was eagerly waiting for him came. When Malhun Hatun’s labor pains began, Osman Bey in Söğüt was immediately informed. While Bala Hatun and the midwives did not leave Malhun Hatun for a moment, she gave the good news to Osman Bey with the words “Your son was born safe, Osman Bey. His mother is also good.”

Osman Bey, who was very touched when he saw his son, said, “You gave me not only a son but the world, Malhun Hatun. If you allow me, I would like to name him Orhan, who conquered many cities, founded cities, and ruled with justice.” Osman Bey, who bowed to his son’s right ear and gave his name to his left ear, said, “Son, son… Osman Bey, son of Ertuğrul Gazi, gave his name to your father. May Allah give you his age. Kuruluş Osman Season 3 will continue with follow up story of Kuruluş Osman Season 2 English Subtitles.