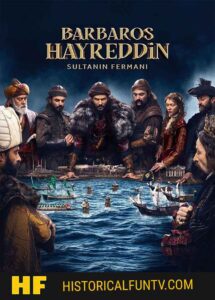 Barbaros Hayreddin Season 1 follows Hayreddin Barbarossa’s rise to power, from pirate to Ottoman Admiral. He eventually leads the Ottoman fleet to numerous victories against the Spanish and Venetian fleets, eventually leading the Ottoman Empire to become a major European power. As he rises in power and influence, Hayreddin faces enemies within and outside the palace walls, as he seeks to protect his beloved Empire and his family. As the series progresses, his battles become more personal, as he seeks to protect his loved ones from his enemies while also protecting the Empire from outside enemies. Along the way, he discovers truths about his past, and is faced with difficult decisions that will shape the future of the Ottoman Empire. Watch all episodes of Barbaros Hayreddin Sultan Fermani Season 1 in English.