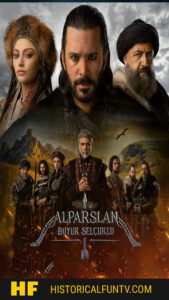 After the conquest of Vaspurakan, Alparslan rolled up his sleeves to make Vaspurakan a Turkish-Islamic city and started to work for the enrichment of the city by focusing on trade. While Alparslan was carrying out these activities, the ruler of Bukhara, Arslan Yusuf from Karahan, was provoked by the new Tekfur of Ani, Grigor, and attacked to take the city of Belh from the Seljuks.

The agreement reached between the sultans of the two states after the war will completely change the life of Alparslan and Arslan Yusuf’s daughter Seferiye. Will Seferiye agree to this marriage she never wanted just to save her father’s life? How will Alparslan, whose fire burned in Akça’s heart is still not extinguished, approach this marriage that he was compelled to by the order of Sultan Tuğrul?

Ani’s new ruler, Grigor, came to the land of Ani to start his duty with his son, Captain Alexander, but with the plan he established, it shows that he has been following the politics here for a long time. What will be the new plans of Grigor, who wants to turn the balance of power in the region in his favor by creating an internal conflict between the Turks by making the Karakhanids attack on the Seljuks?

What role will his son Alexander play in these plans? Will Nizamülmülk, who retreated to the mountains after the martyrdom of Akça and suffered, and will reunite with Alparslan by throwing his pain into himself? What will Alparslan do to get his brother back among them?