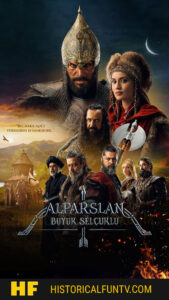 On the day when the Seljuk Sultan Tugrul Bey about to designate his heir, he learns that the Turkmens had been slaughtered by the Byzantines. He dispatches an expedition to Anatolia. Mysterious assassins target the Seljuk Meliks as they go on a mission. The traces of the attack lead Alparslan to an unexpected location. While on the hunt for the assassins, Alparslan saves the life of the Turkmen girl Akça, who has fled Byzantine persecution. This would be the first spark of Alparslan and Akça’s epic love. Alparslan, on the other hand, is oblivious of the secrets Akça conceals beneath her beauty.

The Byzantine Emperor sent General Dukas and Captain Romanian Diogenes to Ani to resolve the Turkmen issue. However, Yannis, son of Ani Tekfuru Kekavmenos, makes a blunder, prompting Sultan Turul to declare war. Alparslan, who was told the good news of victories in his dreams as a boy, meets Byzantium with the Seljuk army in Pasinler. Pasinler will be Alparslan’s first step on his blessed journey of opening Anatolia’s doors to Turks. Watch Alparslan The Great Seljuks Season 1 now on HF.