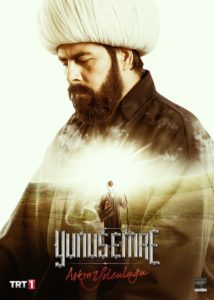 In 1268, Mongol invasions in Anatolia lead to Yunus’s appointment as a judge in Nallıhan. Later, he joins Tapduk Emre’s lodge to train as a dervish.

Zahireci Zeki Sergeant, who has been buying and selling the supplement from the foundation for years, gives little money to the product this year, and rejects Molla’s insistence if he wants to. He soon learns the reason, Molla. A man from Sivrihisar said that he would fill his barns no matter how much wheat he wanted at a lower price. Molla Kasım arrives at the dervish lodge and tells Tapduk Emre about the situation one by one.

Molla Kasım sets out on the road to Sivrihisar in search of the planter whose name is unknown. Who is this man, what is he, why does he break prices, wants to waste his efforts…

Two friends are sent to the astrologer… My sister sultan, who is obsessed with what she heard from the astrologer, plunges into Yunus’s dreams again. Molla, who came to Sivrihisar in the Yunus Emre Aşkın Journey series, seems to have found the person who was cultivating in Sarıköy after asking and saw the horror, and the person he sought is none other than Yunus. Even if the mullah speaks, it does not help, obviously, Yunus has a great resentment towards Tapduk and the dervish lodge; resentment fueled. It is obvious that he has nothing to do with farming, buying and selling.

Mullah Kasım is desperate, Bey Candaroğlu goes to Argun and says that what Yunus did is against the law, against the law, and asks him for help. Yunus convincingly explains the situation to Candaroğlu Argun. Candaroğlu finds Argun Yunus and throws him into the well. Tapduk Emre will find Yunus in the well, and he will repent and return to the lodge.

Yunus Emre The Journey of Love Yunus Returns to the Lodge

My sister Sultan will be happy for Yunus’s return and will smile after a long time. Seeing my sister’s face start to smile, Zahide insists, but my sister does not tell, but Zahide has already understood as a woman.

Dolphin watching will continue from where it left off in leech. Ali Taygu, Güngör and Derviş Çağrı remained in the dervish lodge and the others left. Upon his return, the rivalry between him and Molla Kasım, which was unfinished and mostly led by Molla, flares up again.

Just these days, Bey Candaroğlu Argun got into a crushing fight with his son Şahin and is looking for a new consultant by releasing his son from his work. All Nallıhan and Sivrihisar also call Tapduk Yunus while this news is being spoken and send him to Candaroğlu Argun Bey. Candaroğlu remembered him. He immediately throws you in the dungeon. But when he realizes his mistake, he apologizes. Yunus Bey is Candaroğlu Argun’s advisor now. From administrative consultancy regarding the management of the region, taxes, collection, big fief…

Yunus will also meet Candaroğlu’s young wife Zahide in the mansion. Zahide, who knows her friend Bacım Sultan’s interest in her and listens to Yunus’s story from Bacım Sultan, obviously has a crush on him.

What Trouble Will Yunus Emre Cause Zahide Yunus In The Series Of Love’s Journey?

On the other hand, the intimate relationship between the two women will be reversed because of Yunus. With the support of Zahide’s husband, Argun Bey, she will cancel the work of the women’s workplace under the leadership of my sister Sultan. This event will cause the issue to attract more attention in Nallıhan. Everyone, especially the Ahi quarry, talks about this and why.

What Will Happen in Yunus Emre Love Journey Series

How will Yunus Emre cause trouble for Zahide Yunus in the series of Love’s Journey? How will Yunus get rid of this scourge? How will Candaroğlu Argun Bey be affected by these events? How will Yunus continue his life after this process? What situations will the rivalry between Molla Kasım and Yunus create? What surprises await Yunus and Bacım Sultan? What journey will Tapduk Emre and Yunus embark on? What changes will this journey bring about in Yunus? The answer to all these questions is in the Yunus Emre Aşkın Journey series.