The father of Sultante Osmani, Osman Gazi was born in 1258. He was third son of Ertugrul Gazi and Halime Sultan.
Osman Gazi was a tall man with a round face, dark complexion, hazel eyes, and thick eyebrows.
His shoulders were fairly large and the upper part of his body was longer than the other parts. He used to wear a Horasan 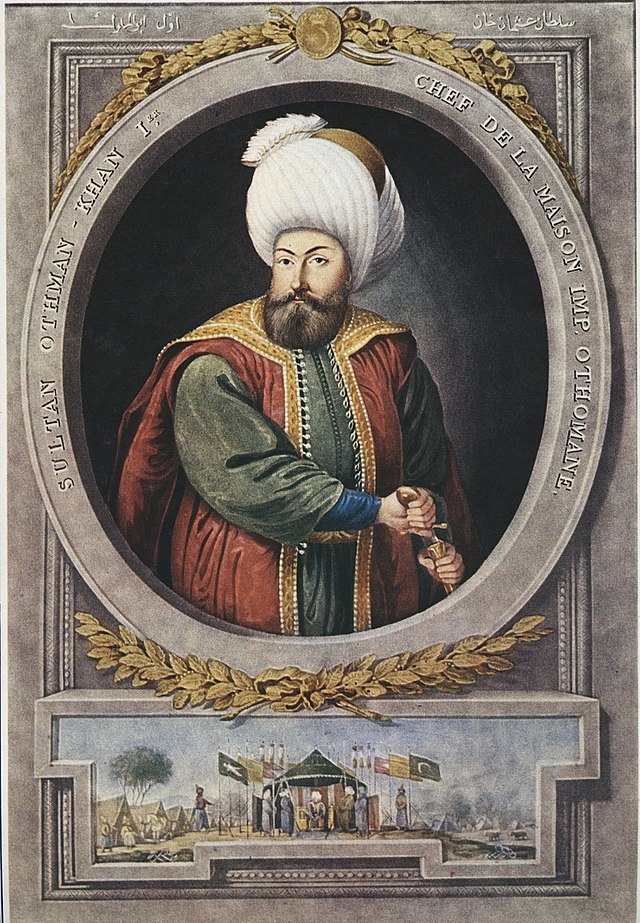 crown in the style of Cagatay, which was made of red broad cloth.

Osman Gazi was just 23 when he succeeded the leadership of the Kayi Clan in Sogut, in 1281.
He was a very brilliant rider and a fencer.
He married to Malhun Sultana who was the daughter of famous Omer bey.
Mal Sultan later gave birth to Orhan who succeeded the throne.

Osman Gazi appreciated the opinions of Edebali (the famous Ahi Sheik) and he respected him.
He often went to Edebali’s house where a dervish group meets in Eskisehir Sultanonu and been his guest.

One night, when he was a guest in Sheik Edebali’s dergah, he had a dream. As the sun shined, he went to Edebali and told him:
“My Sheik, I saw you in my dream. A moon appeared in your breast. It rose, rose and then descended into my breast.
From my novel there sprang a tree. It grew up and turned green. It branched out and got complicated.
The shadow of its branches covered the whole world. What does my dream mean? After a little silence, Sheik told him:
I have got good news Osman! Allah gave you sovereignty and to your sons. All the world will be under the
protection of your descendants and my daughter will be the wife to you.”

After this unusual event, the Sheik gave his daughter Bala Sultana to Osman and Alaeddin was born from this marriage.
Upon his conquest of the fortress of Bilecik, the ruler of the Seljuks of Rum, sent him “a horsetail, a standard and a drum”
as the insignia of sovereignty in 699 A.H. (1299 A.D.). Thereupon, he minted coins and had the Friday prayers recited in his name alone.

His grand vizier was his younger son, Alaeddin Pasha. Osman was the first to Ievy a tax of one “akçe”. Osman Gazi was surnamed “Black”,
which according to an ancient Turcoman tradition signifies brave and heroic. As we learn from the Oðuzname, the same epithet was given to Kara Yusuf, the ruler of Karakoyunlus, and to Kara Yülük Osman Bey, the Sultan of the Akkoyunlus.

With Sögüt as their base, Osman and the Muslim frontier warriors (Ghazis) under his command waged a slow and stubborn conflict against the Byzantines, who sought to defend their territories in the hinterland of the Asiatic shore opposite Constantinople (now Istanbul).

Osman gradually extended his control over several former Byzantine fortresses, including Yenisehir, which provided the Ottomans with a strong base to lay siege to Bursa and Nicaea (now Iznik), in northwestern Anatolia.

The founder of Ottoman empire- risen from Anatolia and his descendants reigned for 600 years, over three continents.
Osman was succeded by his son Orhan, who captured Bursa on April 6, 1326. Ottoman tradition holds that Osman died just after the capture of Bursa, but some scholars have argued that his death should be placed in 1324, the year of Orhan’s accession.

When he died, he left a horse armor, a pair of high boots, a few sun jacks, a sword, a lance, a tirkes, a few horses, three herds of sheep, salt and spoon containers.

Let’s see how Mehmet Bozdag is going to develop the story line for Osman Gazi.

You can start watching the great foundation laid by Ertugrul Gazi and later his son starting the beginning of one of the longest reigning and greatest empire this world has ever seen. Start watching from Season 1 in english subtitles and HD! quality only on Historical Fun TV.