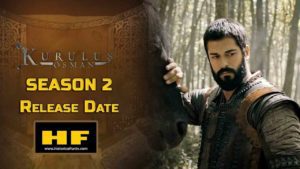 Kurulus Osman Season 2 release date will be on 7th of October 2020, and will be available on 8th of October on HistoricalFunTV.com. After the end of the Resurrection: Ertuğrul, the fans were eagerly waiting for the next thing. Mehmet Bozdağ revealed that Diriliş: Ertuğrulis having a spin-off called Kuruluş: Osman. The first trailer of the series was released on October 14, 2019. After that, the second trailer was released on October 24 , 2019, and viewers were hyped to the new season, and finally the first episode of the season was broadcast on November 20 , 2019. Now, in the second season, Ertuğrul is going to return to the tribe, according to some tweets, Mehmet Bozdağ says there’s going to be a ‘surprise’ about the actor playing him.

WHAT HAPPENED IN THE SEASON FINAL?